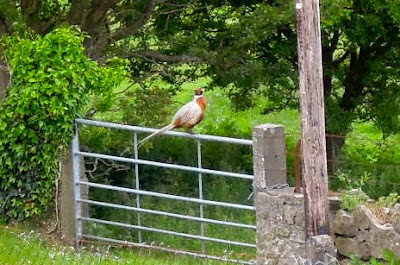 This pheasant was in the back garden this morning. Foolish bird! I know it’s the diamond jubilee, but he didn’t have to offer himself up as the main dish of the day. Austin was ecstatic and couldn’t wait to get out!

However, in the time it took for Austin to break down the door and for me to get my camera, the not-so foolish pheasant had hopped back over the road to the field where he normally lives in harmonious connubiality with the wife and kids. He’s subsequently been celebrating his narrow escape by squawking avian obscenities back over the road all day (I can hear him even as I type!).


Austin was a bit non-plussed!

Award time! I just want to add that CATachresis has been awarded the Liebster Award again :-)

It is awarded to those blogs that have less than 200 followers just for encouragement and support. It is unlikely that CATachresis will ever get up to 200 readers unless I change the name to "Austin’s Fluffy Bits" or actually allow him to blog or something!  Anyway many thanks to Savannah of Savannah’s Paw Tracks for giving it to us. If you don’t know her, you must go over and say hi. She is a recovering shelter cat and boy is she recovering fast! :-)

Finally, I can’t finish without mentioning again Queen Elizabeth’s Diamond Jubilee. Whatever one thinks about politics, the monarchy, or this particular royal family, I for one, am proud to be British and be part of this tradition. The Queen has been on the throne longer than many/most of us have even been alive and to have her knowledge, wisdom, common sense and huge experience (including twelve prime ministers from Churchill onwards) is very reassuring in these perilous and very uncertain times. She is a constant. Long may she reign! 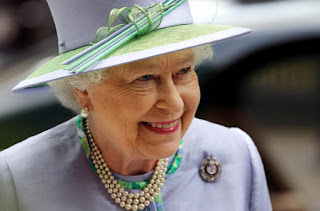 Posted by CATachresis at 17:00