...... we had an interesting couple of hours administering the worm pill.
You'd think after three years it wouldn't be such a big deal.  I won't go into the excruciating detail, but there was a good outcome and the evil medicine was eventually swallowed - albeit covered in cat spit and fur.
All I know is that now one of us can step confidently into the helminth infested world, safe in the knowledge that they are protected from every tape-hook-whip-heart worm and nematode known to man.  Problem is, I don't think it's necessarily going to be the cat?
Oh and just in case you were worried, the Aged P didn't need to have stitches after all, but she's booked in for six sessions with the trauma therapist starting next month.
So I would say that on the whole it was a resounding success.
Note to self:  I wonder if they do catnip flavoured ....... ? 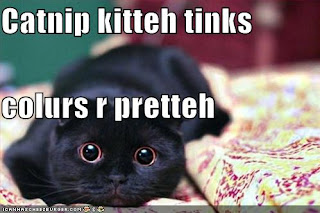 A Work of Art! 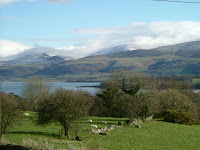 I have a wonderful view from my window of mountains, water, fields and trees - not to mention the City of Bangor (well best not!) - and in the field right opposite there are the sheep of course.
Ok, yes, I've mentioned Blackie and her extended family a few times, but today I saw a work of art being created before my eyes.  The farmer came with his sheepdog. This, in itself, is not an unusual occurrence, but as I watched the two of them working together as one, a picture began to form and it became something akin to an artistic performance. The ebb and flow of the sheep as they were undulated across the field like the fluctuating movement of the tide on the shore. They were totally at peace as the beautiful dog calmly but energetically did the farmer's bidding.  Backwards and forwards she ran making sure not one sheep escaped or was allowed to do its own thing apart from the group. 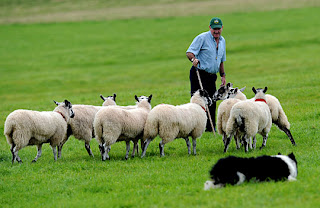 The dog was asked to do a variety of tasks including sitting with the sheep penned in a corner for about 20 minutes, while the farmer decided which to take and which to leave.  When the whole thing was over, the farmer whistled and the dog went to him.  And the sheep?  Well they just went back to munching their lunch totally unconcerned, unfazed and untraumatised - even though half their number were now missing and had no doubt gone to Llangefni abattoir for recycling (ok, not thinking, not thinking!).  The sheep are probably both very stupid and very trusting.  "All we like sheep ...... ......." 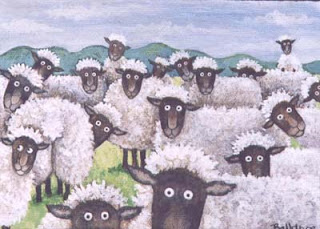