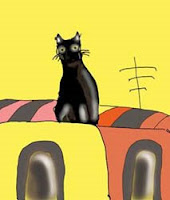 It seems the more firmly Tigger thrusts his paws under the table, the more Austin doesn't like it!  In fact the other day the reaction from Austin was so bad I am becoming concerned about his mental state.  Now I know that it was Austin who brought Tigger in originally and as time's gone on I've just assumed that they were best buddies. Well they are!  I mean Austin doesn't do the growly thing when Tigger comes in the garden and over the weeks they've played and slept in the house with seemingly no acrimony.  However, I am now starting to wonder whether young Tigger - him with the balls bits errrr family jewels still about his person might just be a bit of a bully and maybe, just maybe is trying to take over the position of Top Cat by stealth!!!  Why do I think this? Well come in a bit closer and I'll tell you ....

He's very patient; sits at the door practicing his extreme waiting technique to absolute purrfection. He doesn't demand to be let in - unlike Austin who's truculent meow can be heard way over the Straits in Bangor. I open the door and he's very polite with his "please" and "thank yous", before he rushes to the food dish and wolfs down the lot.  He then very slowly and quite delicately and looking everywhere except where he's going, slithers like a snake across the floor until he's within hopping distance of Austin's chief bed. Then with one small step for cat, but one giant leap for catkind, plonks himself decoratively on top the fleecy blanket.  Austin, meanwhile, is watching all this from behind the curtain as he (mistakenly, as it happens) thinks Tigger is going to pass by there.  He's completely thwarted and not a little embarrassed as he was all ready to pounce on the unsuspecting tabby.

Now catiquette stipulates that there should be no pouncing, scratching, biting or thwacking when one of the protagonists is either a) eating or b) kipping.  Tigger, therefore, is proving himself to be an expert at scrap avoidance by making sure he's always seen to be doing one or the other when in the house. It's very frustrating for our little tux boy who, whilst Tigger's in the house eating his food and sleeping in his bed, is understandably a tad unsettled. So he shows his distress in various ways

a) prowling around and meowing at the top of his voice
b) tearing up the carpet in the corner by the radiator and at the bottom of the stairs
c) shredding the furniture, even though he knows he shouldn't. In fact he's very crafty about this one; he starts with the usual scratch scratch on the side of the sofa near the door, but when I reach for the water spray he runs round to the other side where I can't get him and after a moment of deafening quiet, starts shredding that side!

Yesterday we had an incident - oh yes we did.  Looking out of the kitchen window I saw young Austin stuck on the roof of next door's conservatory (not the Bodgit and Scarper house, the other side!).  I watched as he prowled up and down the edge of the edifice trying to pluck up courage to jump across the yawning gap to the concrete wall that bordered the lawn.  He was very uncertain.  After a few minutes of fruitless pacing he stopped and moved back to the middle, sat down and started mewing pitifully. He looked so pathetic, so I made to go outside to try and encourage him to be a bit bolder, but by this time Tigger had arrived and was "waiting" to be let in.  He hadn't seen or heard any of the drama so far.  The neighbour's house, by the way, was empty and I couldn't get into their garden - not that I could do anything even if I was there!

Getting as close as I could to the fence I called for Austin, telling him that he was going to have to jump as I wasn't about to call out the fire brigade on such a trivial matter!  Tigger was doing his "I'm-absolutely-starving-to-death-here-doesn't-anybody-care" thunderous purr while performing a beautifully balletic figure of eight weaving in and out my legs (rather hindering my ability to walk).  Suddenly Austin let out an ear-splitting yowl which can only be described as despair mixed with petulance - I'm sure I saw him stamp his paw - and Tigger, abandoning his obsequious behaviour around my feet, shot his head up and looked over to the sound.  In a moment he had assessed the situation and leapt over the fence to the wall where Austin needed to be.  He let out one authoritive "meeyat" sound.  Austin immediately responded by moving to the edge of the roof and without even thinking jumped easily onto the wall landing beside the tabby.  They pressed noses in greeting and very nonchalantly and displaying studied indifference eventually eased themselves back through the fence.

Tigger looked at me as if to say "Now, it was chicken AND a side order of Tuna treats wasn't it?!"

For the rest of the day he slept undisturbed on Austin's bed and Austin did not shred one piece of furniture.  Of course it is probably because he was acutely embarrassed and now Tigger has a hold over him.  Let's face it, if Big Ginge heard about this it would be all over the neighbourhood in no time! The feline fraternity would soon be chortling with derision behind their collective paw.  Yep, I believe that Tigger's campaign to oust Austin as Top Cat is being realised slowly but surely.

Door's still open and cat flap's closed!  I mean it's not exactly rocket science; all he has to do is bang his head up against it and it opens for goodness sake!  Meanwhile I'm making myself an object of ridicule and pokey finger fun with the neighbours as I try to demonstrate how easy it is.  Well it would be easy if I my head wasn't bigger than the flap.

"This is how you do it Austin"

I mutter as I creak painfully down on my knees and press my nose against the glass, my rear end momentarily eclipsing the mountain vista and darkening the sky over the Great Orme. He just blinks and looks away, embarrassed.

"She's absolutely nothing to do with me".

We both retreat to have a ponder, me with a cup of coffee, he with an all over body wash and general spruce up - have you noticed how cats always resort to cleaning themselves when they are at a disadvantage, embarrassed or want to express disinterest or indifference?  It's the cat equivalent of "WhatEvor" and it's a terrible thing. In fact I would go so far as saying that you've never known real rejection until you've been ignored by a cat.

While Austin, with his back to me, studiedly continues with his lick-lick-wipe routine, I spot Tigger emerging from the bushes. He runs up to the summerhouse and sniffs intently around the flap.  Hmmmmm?  It appears he's a glue sniffer as well as a schnorrer!  Maybe, just maybe, this will be enough to induce him to go through?  But no, not on your nelly.  Having had his fix he went to the door and leaned up against it. Turning back he looks at me as if to say