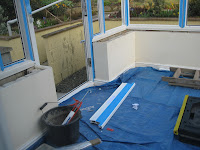 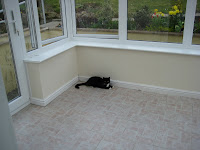 We'd been thinking for a while now that Austin's bedroom needed a bit of a makeover. Doubling as a conservatory during the day, it was ok for sitting in if it wasn't too hot, or too cold, or raining. Nighttime it was the perfect place for catnappers and others who come pre-lagged. However, if we didn't want to wake up one morning after one of our rather frequent force 10 gales to a pile of debris and a squashed or missing Austin, then the time had come for an upgrade.

To be fair, Austin had submitted his request for planning permission quite a while back. Our response at the time had been that as it was a grade 2 listed building it couldn't be modified, demolished or rebuilt because it was protected under the Listed Buildings Consent Act which states:

"No person shall execute or cause to be executed any works for the demolition of a listed building or for its alteration or extension in any manner which would affect its character as a building of special architectural or historic interest, unless the works are authorised." Planning (Listed Buildings and Conservation Areas) Act 1990, Section 7 Sub-section 2 Para 9.

Austin was having none of this and countered by arguing that a) the building might well be listed, but if it listed much more he wouldn't be able to hold his head up straight and would get a crick in the neck and b) he is a cat so he could sign the contract and those planning nazis wouldn't want to go to a lot of trouble and needless expense just to try and prove he was a person - which of course they can't, as he is a cat!

There was really no arguing with him and we saw his point to be honest, especially as he'd brought in Tigger as back up nagger.

So we conceded and called in Steve'nSteve the double glazing (geddit?) supremos to replace the plastic leaky grade two listing conservatory for a top of the range upright steel and glass one. The blokies were very proud to tell us that the roof glass was self-cleaning!!? I spent a fantastic five minutes trying to envisage how that would work in practice with pictures of little glass hands popping out with soapy shammy leather all over the roof, until they saw my own double-glazed expression and gently took me to one side to explain how it really worked! Still prefer my way though.

So they came last Thursday week and with a couple of taps of the hammer the pitiful structure crumbled. Austin, who'd appointed himself foreman and general hamperer, for some reason became very agitated, and Tigger, who'd popped by for a chinwag and a mouthful of Go Cat all-in-one, had his eyes out on stalks. You could see the tiny cogs turning in their collective brain cell.

What have we done? It might be dilapidated and ramshackle but it was home! Where're we gonna sleep tonight?

There was obviously a sudden volte-face as Austin rethought the short term sleeping arrangements. All the conservatory furniture was stock piled in the diner bit of the kitchen-diner. This was enhanced at the end of days one and two of the three day make-over with the tools of double-glazed Steve. Actually the three day makeover was really five days as it included a weekend after day two. Hope you're keeping up? As Austin was getting all sweaty and claustrophobic at the thought of where he was going to be confined, I took him to one side and explained that it was only for a night or two, honest! And just think of the palatial bed-sit he was going to get at the end of it and anyway he was the one who instigated it all! He said ok, but looked a bit sceptical and we left it at that.

Night One! He resided in the kitchen. My bedroom is underneath and I was kept awake by Austin's impression of Red Rum winning the Grand National for the third time as he thundered over The Chair, did a wheelie around Canal Turn and plowed through Becher's Brook. Finally at 3:30 his yowling woke the aged parent who let him out into the garden.

Night Two! He was upgraded to the living room. He took his en suite with him and also full English cat breakfast and mini bar. However, this obviously was not quite the luxury to which he wanted to be accustomed, even though he had choice of bed and views to die for. At 2:30 he broke out and started stripping the paintwork off the AP's bedroom door. We are still trying to work out how he managed to open the living room door as the handle's stiff and it opens inwards!! He must have jumped up and swung on it until it gave way! Why am I never around when he does something amazing. All these YouTube clips of cats and other small animals doing funny, cute, intelligent things! What are these owners doing all day that they can be in the right place at the right time with their camcorder on record?? I reckon some people have nothing better to do than sit around videoing their animals, whereas some of us have lives - well not me, but some do I understand.

Meanwhile I have a permanent headache brought on by having to endure the constant sound of stampeding buffalo thundering across the prairie. I did dally with the thought of allowing him once again to have the run of the house, but remembered in time that his favourite nocturnal pastime is to negotiate his way to the top of the wardrobe in my bedroom and then leap off with a blood curdling screetch on to the top of my snoring supine self who's doing a very passable impression of a beached whale under the duvet. It's not nice, especially when I get a mouthful of furry tail and the odd claw embedded in my person! So Austin did spend quite a good deal of the night outside, which he doesn't really like as he says the night air plays havoc with his complexion!

Night Six! Well he is now a very happy bunny indeed. Brand new pad with central heating in the winter and air conditioning in the summer that is regulated quite easily by closing the window. I gave him the introductory tour, pointing out all the little luxurious extras now included, like the four poster blanket with built in nose warmer, and the top of the range self cleaning en suite commode placed discreetly behind the washing drier! He took his time, that's for sure. He sniffed every nook and cranny and even went outside to inspect the architrave and decorative finials. I think he ticked all the boxes on his mental checklist and is now at the point where he will be able to overlook the privations he suffered the preceeding several (hundred) nights!

Now, apparently, all we've got to do is fork out for some blinds for a bit of privacy!!! 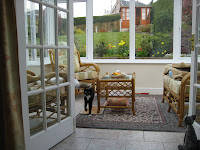 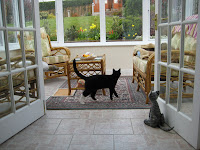 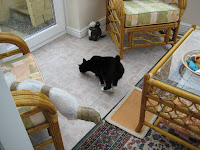 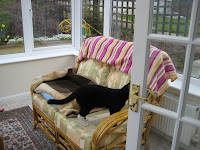 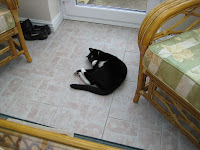