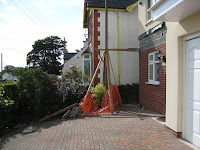 ..... just in case you're thinking I've lost interest in the activities next door, let me assure you I haven't! To bring you up to date. Weellllll, the word "nothing" just about covers it. Still a hole in the ground with a pole growing out of it, but now there does appear to be bits of wood sprouting from the pole. This must have happened overnight when I wasn't tweaking my non-existent nets. Despite the fact that I spookily hear men's voices and the sound of hammers first thing in the morning, there is no sign of any activity! I think it is clear to all that Mick and Pat have bodged it and scarpered - at least for the time being. However the bit of orange plastic they've left guarding the hole is rather fetching.

Moving on to more feline activities, the inclement weather has meant that Austin does not venture out much. Being a modern lad, this means that he gets bored very easily and tends to trash the place. When Fidget comes over to "hang", one may as well go out and leave them to it! 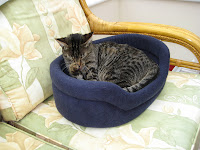 The young tabby has taken over the spare bed in Austin's pad and seems to be insinuating himself into the household bit by furry bit. When I open a door now - or even a window - I can never be sure which one is going to be first over the threshold. And then of course when you're wandering around without your specs on you can find furry rugs where you never had them before!

Fidget's a nice cat. He doesn't mind being picked up and cuddled, he just nestles in, head under my chin - but then he needs to be in full unctious mode if he wants to keep getting Austin's leftovers and the odd tickle under the chin. Whereas Austin (as I have no doubt mentioned before) is all spikey claws, biting and yowling, unless of course he initiates the cuddle. Then he embarks on a process that can only be described as "extreme snuggling" when he drools and pummels and head butts my nose, looking up at me with adoring green eyes. It is, no doubt, a kind of self-help regression therapy that he's learnt about from the internet! For me the effect is something akin to shiatsu (which until today I thought was some kind of Japanese dog!). After he's done this for a while, and I'm about to start charging rental, he sees Fidget out the corner of his eye and magically morphs into the hoodie teenager from h*ll. 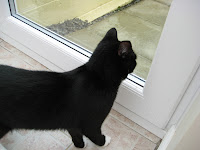 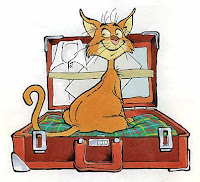 .... well he was having nothing of it, was he! Having feasted in the Elysian fields and drunk the nectar of the gods, Austin has now decided that his compact and bijou residence- complete with en suite and mini bar, I might add - is a bit infra dig and he has packed his bags ready for the move to the larger and more affluent suburb of my bedroom.

However, I have informed him, through my solicitors, that this place ain't big enough for the both of us! He replied, through his solicitors, that this contravened his human rights and he will take me all the way to the supreme court at the Hague to prove it. I mentioned that as he wasn't human, it mattered not what he thought under European law. He declared that the Human rights law was universal so therefore I couldn't discriminate just because he was a cat and anyway didn't cats and humans share about 96% of the same DNA? I countered by saying that we shared approximately 93% of DNA with a komodo dragon and I wasn't about to let one of those kip in my bed!! I directed him to the 32nd chapter of the introduction to the preface of the appendix, paragraph 15, sub-para 28, addendum 12, codicil 8 of the Universal Declaration of Human Rights which says that it "does not constitute binding international human rights law - especially if you're a cat and are DNA deficient". So he could go fry his titbits! He muttered something that sounded like rowlocks.

Well things got a bit ugly after that. There was a tussle - skin, fur and DNA flying everywhere. Harsh words were exchanged and we parted.

One has to live with the consequences of one's actions, but certain issues need to be addressed and some questions answered:

1) would redecorating the kitchen remove the stains completely?
2) could caterwauling be accepted as an olympic sport by 2012?
3) how much will it cost to replace the broken glass?
4) could splinter embedded in paw be removed without taking the door off its hinges?
5) Will the NHS cover the cost of counselling if your DNA doesn't reach the required level?
Posted by CATachresis at 21:25 5 comments: