Here are the boys on their favourite perch.  (Tigger's up top; as he always likes to be!).  I had to take the photo through the window rather surreptitiously, because if they'd seen me they would have jumped down (and probably knocked each other off the 5 inch wall!) 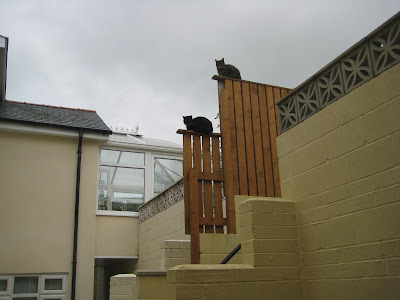 In fact Tigger had a rather nasty fall jumping down onto the wall the other week.  He slid off and landed very awkwardly on the lower wall.  I didn't see this, but it was very upsetting for the person who did (my mother)!  I'm not sure as to the extent of his injuries, but his face was screwed up and he couldn't eat!! So it must have been very bad.  Poor little chap :(  Anyway he disappeared and we worried for about a week until he turned up all of a sudden on the roof of the summerhouse!  Can't have been too much damage done thank goodness :)
Posted by CATachresis at 17:20 4 comments:

It's been a while since I last wrote a blog post.  The reasons are (not so) many and varied.  I was "lying on one side in my bed of sickness" for a lot of the time and was just glad the vicar didn't come and implore the Lord "to keep me there".  Doctor came though and did more or less the same thing.  Anyway during this time one would have expected a normal cat to be giving comfort with his furry presence on the bed.  Nope, there was none of that.  In fact Austin would not come anywhere near me until I was starting to feel better!

Wonders if it's too late to replace him with a more compassionate model?

You read of cats who live in care homes that go and sit on the bed of someone who is dying!  One can be thankful for small mercies, I guess!  Austin has changed though.  Over the last couple of months it's as if he's realised (at last) that he is a cat and therefore should jolly well start behaving like one.  Apart from filling out and losing his gawky gangly teenage look, he has also made one or two adjustments to his list of requirements.  Whereas before he would quite happily (on the whole) come when called and go out and come in at our behest, now he stamps his furry foot if I should even suggest he stick a delicate claw outside when he's not in the mood.

In fact he's gone back to using the litter tray again after ignoring it disdainfully for about 18 months and trundling off to the outside privvy under the hebe bush.  But then who can blame him for wanting to exchange cold mud up the b*m for nice warm self-flushing wood chip - I mean you don't even have to go to all the trouble of digging a hole and then messing up your dainty paws by covering the deposit.  You turn your back and poof, it miraculously disappears.  The downside is that one tends to have an audience!

He also, after two years of nary a complaint, has started to protest about being shut in the conservatory at night.  He was always an absolute delight when it came to nighttime shutdown.  Not any more.  I can hear him practically hurling himself at the conservatory door in his desperation to get out and when I give in and go and open the door at some ungodly hour, he decides to go all playful, rolling over and purring extremely loudly, I think he's going to burst with joy; he so hates to be alone.  Then of course he has the run of the house and spends the rest of the night making sure that we don't get a wink of sleep.  It's his mission in life now!

To be honest I think he's been frightened by something.  He's always been a bit of a nervous cat, but lately he's been living permanently on tenterhooks.  Not a comfortable place to perch yourself that's for sure.  I have an inkling that Big Ginge has something to do with it.  He has taken to walking through our garden morning and evening and for some reason Austin takes this as a casus belli and runs for cover round the back of the sofa. 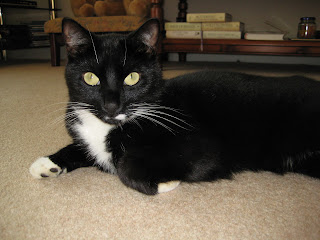 Then of course we were struck by lightning a couple of weeks ago - oh yes we were!  Took out the electricity, phone line, two tvs and a Sky box not to mention my mother, who was on the phone at the time.  Damage to the latter was minimal, thankfully, but having her heart jump started when she really didn't need it was a little discombobulating for a lady pushing 80!  Happily she now seems perfectly ok;  though it could be my imagination, but she does seem to have more of a spring in her step now!  Anyway we are still in the throes of getting tvs and satelite equipment assessed and replaced. Oh and the conservatory has sprung another leak and developed a crack in the corner!  All things considered I suppose one can't really blame Austin for his desire to move out of his compact and bijou residence.

Also he was outside somewhere when the lightning struck and became so fraught with nerves that he developed dandruff and had to go to the vet - well I didn't know it was dandruff!  He was prescribed vitamins which comes in drops and which I have to put in his food once a day!!!  The vet said "cats love the taste".  Yeah right!  This cat has got spitting out his food raised to an art form.
Posted by CATachresis at 17:20 1 comment: