Poor Austin. His life is one big trauma at the moment. Not only is Toby the Tibetan Terrier making one of his not infrequent visits, there are also a couple of strange men in the garden .... in HIS garden doing strange things with bits of wood and nails. What's more, Big-Ginge-from-over-the-back has been making official visits as part of his EU brief to regulate feline garden use. It's enough to turn a beleaguered tux into a smooth white.
He is so distrait that eating is only possible when a trusted member of his staff stands real close and keeps a constant lookout, all the time murmuring soft words into a swivelling ear. This same member of staff also has to fight off all enemy marauders, throwing herself bodily in the path of incoming attackers and taking the flack, nigh-even-unto-death! He says it's in the contract which we both signed before he agreed to take me on.
As things were getting a bit desperate, in an effort to distract His Dolefulness the Mope, I decided to employ a diversionary tactic or two. I'm not sure if they worked quite as one would have wished!
You need to note here that the iPad was on with a cat app open; i.e. it was there for the express purpose of feline entertainment! To be precise it is a virtual goldfish swimming around under the screen that disappears and returns when touched, just you can't really see it cos of the flash. Sigh! 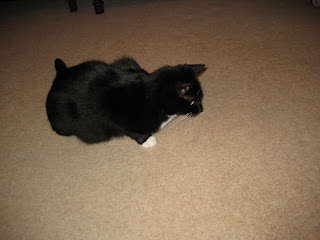 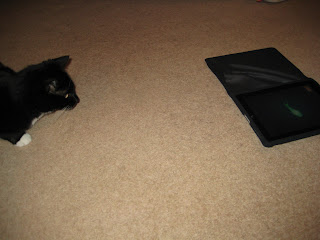 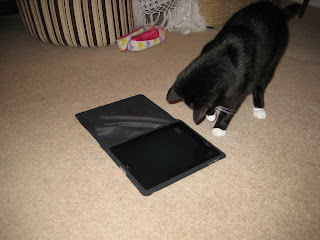 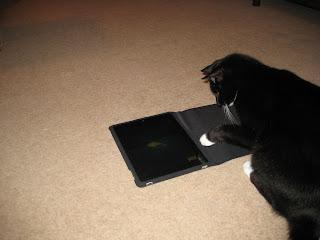 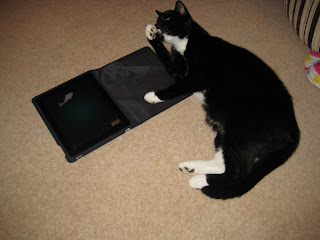 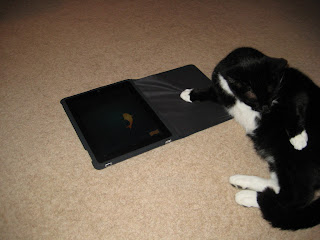 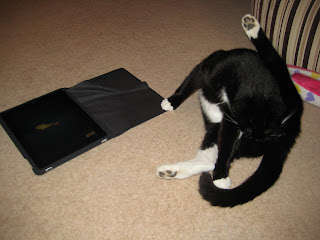 May as well do a proper job while I'm down here!
Oh well! A diversion is a diversion whatever form it might take .......
Posted by CATachresis at 20:24 19 comments:

subtitled The Mad Ramblings of an Elderly Nutter The Cogent Thoughts of a Wise Old Sage.

The hiatus while Blogger was thowing a hissy fit caused me to have a thunk about how we (the cyber generation) have come to rely on the internet in nearly every area of our lives, but especially when it comes to friendship.

Actually I should admit here that I am from the pre-cyber generation, but trying hard to be hip and cool and up with the tekky stuff. When I was young there were just two channels on the telly, which my dad had constructed out of several valves and a cathode ray tube. The screen was tiny - about the size of an iPad but the box it was in, was huge.

As children we played out all day with the other kids in the street. We didn't go home unless we were bleeding really badly. We devised all kinds of games and scams; we were best friends and worst enemies. We went to school together and some of us even went to church together. We did facetime for real. To us the word "virtual" meant "not actually, but nearly".

Well, you can be bosom buddies with someone the other side of the world you've never met and never likely to meet - other than in their "not actual" persona. You spend all your leisure time looking at a screen that varies in size from 3" x 4" to 3' x 4'. You talk and write in something called txtspk. IMHO ASAIC it's OMDB. It doesn't WFM, but RBTL WC it's WF TM. Living life in acronyms with "nearly" people..... YSW. Nuff!

So we gather in these "not actually, but nearly" communities which are based on shared interests rather than geographical location. It is global not local. It is virtual, but none the less it is the new reality. And when you get fed up with talking to pixelled faces on a time lag or txtng into the ether, you just press a button and they are no more.

So with the advent of txtspk and the community now global, deconstructed language and reconstructed friendships now inform the world in which we live.

What next do you think? Gruntspeak? It won't be long before the "now" generation will be speaking fluent troglodyte. And then before you know it, thinking will become the universal language. No need to translate as what you think will automatically transmitted through the airwaves and understood by osmosis. It's a terrifying prospect! The thought police will become a living reality and the voicebox will become unnecessary.

Yep, there is a seismic shift in the concept of friendship and the use of language, but maybe it's not all bad when you realise that the term "keeping in touch" now has a whole new exciting dimension to it. Horizons are broadened when the world can now be streamed into your bedroom through your laptop, iPhone or iPad..... and very soon it will just be a chip in your brain. Better there than on your shoulder?

The Art of Communication. My favourite clip from YouTube from the talking cats series.


What was I saying about a rambling nutter?
Posted by CATachresis at 11:04 13 comments:

Silly Sunday (I know it's Monday, that's why it's silly!) 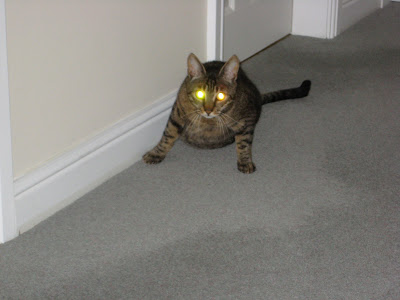 Two can play at that game!!!

Having recently finished reading the amazing story of Homer the Blind Wonder Cat, I have had to face up to the fact that Austin, much as I love him, is just a fair-to-middling kind of puss.

Don't get me wrong, I am very grateful that his eyes and ears are working. Ok, he has a wonky hip, but it doesn't seem to hinder him jumping and wriggling - in fact he's quite a bendy cat. But when it comes to getting up to mischief, he seems to be missing a gene or two. For instance he doesn't seem particularly curious about dark holes, warm linen cupboards or the inner workings of the washing machine, and after 3 and a bit years his trips over the road in front of the house can be counted on one hand (as far as I know!)

To my certain knowledge, he's only done one roof walk and I think that's because he scared himself too much to try anything like it again. He freaks at the sound of rustling, but is quite chilled when Henry the Hoover is doing his dance with the long tail thingy. He does draw the line, though, at being frisked by Harry the Handheld when I try to cut corners during the Big Moult!

He comes when called. I suppose that's quite unusual. Oh and there is, of course, the B-R-U-S-H habit. I get the hint (several times a day) when he rushes and headbutts the drawer where the B-R-U-S-H is kept. There follows much creaking of knees (mine) and deafening purrs (his) as we play out the ritual of the all over body massage and whisker realigning. This activity is his drug of choice nowadays and is rated way above catnip and fabric conditioner! This I know I've mentioned before! He even lets me B-R-U-S-H his tummy without giving in to the temptation to maul my hand. He's realised there is a law called "effect and cause" - if he effects scratchy/bitey, it will cause me to leak red stuff and stop.

This detente doesn't extend to cuddling though. I so wanted a cat to cuddle at will. Sadly, it is not to be. He is the cuddler and I am the cuddlee. This has meant, over the years, that harsh words, bites and claws have been exchanged on many occasion. In fact I've pawsed in the narrative to go and test this once again, only to emerge with a thick lip and a bloody nose :(

Yet when he wants cuddles, there is nothing I can do except sit and receive his love and droolly nuzzles. If I don't sit, he nags. Oh yes he does! He's found that verbal bullying gives him a buzz and me an earache. I give in and he positions himself so he's well wedged between my knees with his front paws stretched out around my ankles, so that the slightest movement results in a piercing of the flesh quickly followed by a piercing shriek!

Austin's verbal dexterity is quite well developed. I have seen the little cogs working in his brain from day one:

Humans are so thick, they don't understand the subtle nuances of cat body language.

If Microsoft had created the human, it would still be the beta version - plenty of bugs and needing patches!

We cats are already alpha ++

It is obvious that humans have not participated in the evolutionary process in quite the same way as we cats. They are barely on the first rung of the ladder. We cats have managed to claw our way up to the top rung and can look out rather imperiously over our catdom. Humans, however, are still at the point of searching out the recipe for primeval soup.

So we cats need to exhibit extreme patience while we educate, elucidate, enlighten ..... and, if all that fails ........ MEOW very LOUDLY!

Oooops! Our highly evolved superhero seems to have his head wedged under the bookcase!
Posted by CATachresis at 21:01 14 comments: