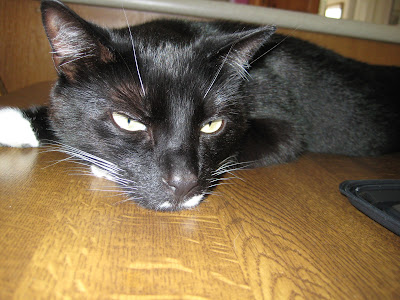 The sight of me running up and down the grass verge in my jogs and slippers tends to worry the neighbours a tad, so I try not to do it unless the moon is full - or is, at the very least, waning gibbous - and there's also an R in the month!  Don't you just love the names of the phases of the moon?  Waxing crescent, waning gibbous, new, full, dark, blue, half, bad ...... ahem!

Well anyway let's get to the point. Austin has joined a gang!  I've been obsessing since he first came about the (relatively) busy road in front of the house and have told him umpteen times not to even think about crossing it.  Well apart from a couple of occasions when Tigger seduced him, I believe he's kept on the straight and narrow - until recently that is, as I mentioned a couple of blog posts ago.  Ok it's not a hugely busy road, but the cars race up and down - it's fairly straight and boy racers come in all shapes and sizes ....  and genders!  I worry.

This road, by the way, is actually part of the Anglesey Coastal Path. It's possibly the only coastal path in Britain which offers the possibility of travelling at 70 mph and has even had the odd 30 ton container lorry find it's way there courtesy of a Ukrainian satnav.  It happened this week; I saw (and heard) a huge juggernaut roar by and then waited a few minutes to watch it reverse all the way back again.  Its shadow filled the window; it had nowhere to go.  Last I saw it was trying to back into a three foot hedge!  If he'd accidentally been caught up in its undercarriage, Austin could've ended up in Kiev or Gdansk, or Aberdeen.  Doesn't bear thinking about!
Anyway, yesterday Austin was spied with his front paws up on the dry stone wall next to the gate opposite, looking into Blackie's Field. Today he was seen sitting the other side of the gate.  He sat there for so long that my curiosity got the better of me and I padded over there in the aforementioned "dissables" to see what the attraction was.  I leaned on the gate and we had a little chat.  We talked about this and that and whether England was likely to get through to the next round - he said it's not likely on present form and anyway he preferred rugby, being Welsh (huh!) and did I know that I was being stared at by a couple of people in shorts and rucksacks?
I ignored him (and them) and looked up and over further into the field and did a double take (literally)!  There was a black and white cat staring back at me.  I looked a bit further and there was another!!!  What the ...... ?  In fact all three of them were sitting facing the road and formed an equilateral triangle about ten feet apart.  Talk about seeing double; I'd never seen either of the other two before (except one of them COULD have been Two, I suppose).  The sheep were just a little way off taking no notice and munching their lunch to the accompaniment of cacophonous cackling from a couple of jackdaws who'd popped by for a snack.  I also thought I spied Tigger skulking under a bush, who was probably drafting a letter of complaint to the council about the deterioration of the neighbourhood and the influx of eastern Eurocats who take all the jobs and indulge in a lot of thwacking with paws.
So there we have it, the Jellicle Gang are now in town.  I'd better get a message to Big Ginge, soonest.

On the way back across the road I started to acquaint Austin with the Green Cross Code, but I confused myself and started chuntering on about the Jolly Green Giant. Realising I was on a hiding to nothing, I have now put road safety awareness back on my to-do list along with cat flap orientation and furniture scratching resistance training. 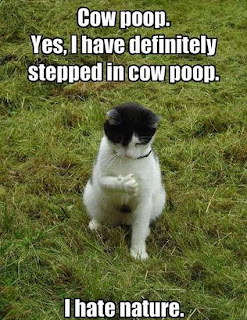