Austin came on November 1st 2007.  I didn't know how old he was at the time, but he looked about 8 months. He was very small and he was a bit of a mistake to be honest.

You see we went to the RSPCA at Colwyn to get a dog, as I felt that I was finally settled enough to commit to caring for one.  As I mentioned in the very first blog post way back in March 2008, all they had there at the centre were seven dalmatians and a suspect pit-bull-terrier-cross. This wasn't really what I had in mind. What I had in mind was a Bichon Frise, all curly, cuddly, cute and preferably pre-trained. 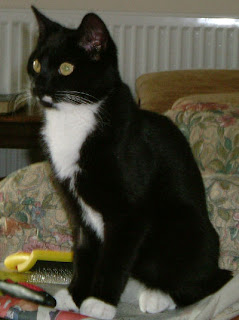 As you can see the above doesn't exactly fit the criteria! What went right?

Well, it was on the way out that we (I was with the materfamlias) passed the cat section. One of us (I don't know who!) said "Why don't we just take a peek?" It was noticeably quieter than the dog section. All I can remember of the experience is that there were a number of glass pens and each had a cat in it. I wanted to take all of them, to be honest, but right down at the end with his front paws up and scratching at the glass was this little tuxedo cutie.

He was called Austin because he had been found inside a car engine. He had quite a serious injury to his hip. The vet mended him very well and all that is left to show is a boney lump on his back at the top of his nearside back leg.

We took him home because he told us to!

After Austin had been with us a few months and we had finally allowed him outside, it wasn't long before he met the tabby, Tigger (name given by us).

I opened the door one day and in they both came. Austin made the introductions and said the tabby was hanging around and could he have a bite to eat? 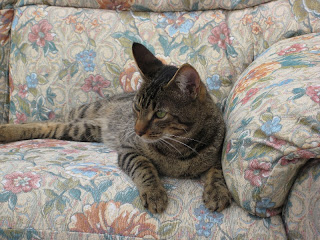 That's it really. Tigger comes practically every day, eats, hangs around, sleeps, eats, plays and fights with Austin, eats and then goes off again to I know not where? He is a nice cat. He might decide to move in proper one day, who knows?

I'm Caro. I'm a woman in my "cardy" age and I've lived for the last few years with my mother on the Isle of Anglesey in North Wales. I spent over thirty years working in various establishments, mainly in and around London and Devon. Also I spent about eight years (altogether) pretending to be a student in the UK as well as in "foreign" parts!

I have M.E. caused by chronic Lyme disease which means I get to spend more time on the sofa than I would like, but hey, I'm practically an old lady!!! My ambition is to become The Crazy Cardy Cat Lady with just one and a half cats.