My Day from H*ll!

Hello Everyone, I have snuck in here because I want to tell you about the terrible time I've had! I thought I might have to have therapy, but maybe telling you will help me come to terms with my trauma and somehow find a way to move on!

It was a dark and stormy day (not really, but added for effect!) and I was minding my own business as I do. All of a sudden I heard a horrible sound! I peeked a look out the window and my worst fears were confirmed. Yes, Danny The Window Cleaner was next door with his rods and wooshy water machine and was doing his best to remove the rendering from the walls of the house!! 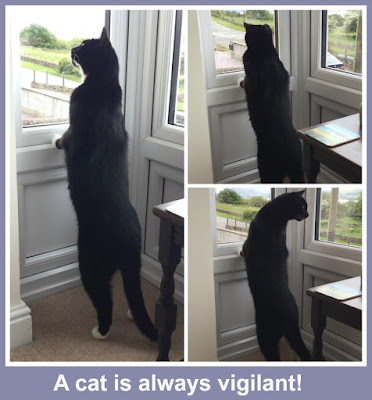 As I looked, Toby the Tibetan Terrier emerged from his lair, saw me and started his horrendous barking! Good grief! I decided discretion is the better part of valour and retreated behind the sofa 🙀

When the furore died down several weeks days hours later I emerged and eager to put it behind me, followed the Staff person into the garage to supervise her as she tried to read the meter. As she is quite sensitive, I obviously didn't want her to feel crowded, so I was, as is my wont, discreet.  So what happened? Yep, you guessed!  She did her business, went out and closed the door. I waited quietly. And I waited. And I waited some more. Come on, you're having a laugh! It's not funny anymore!


Not a scooby doo!! Nothing! Silence! Like the grave!

I was shut in, incarcerated, dumped, without even a second thought!

Weeks days hours Half an hour later someone heard what sounded like a circular saw on steel girders and came to investigate.  About $!%%& time! I could have starved to death in here!!  The upside is, the door will not need to be stripped before it's repainted and my front claws won't need a manipedi for a several years! 😸

Revenge is sweet though!  A little later when the household were relaxing, I deposited my supper in three places on the carpet right where SHE walks!! 😹


Kitties, do you think I will ever get over this?