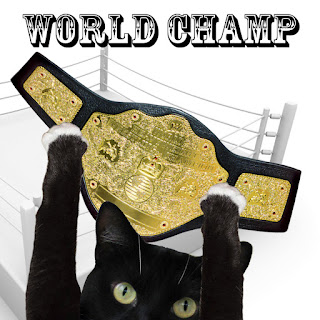 Since he triumphed (with just a little help from Tigger) over the marauding horde of The Black Cat, Austin has now been proclaimed the overall winner, new titleholder and supreme champion in the "Feline Fracas and Fisticuff" world championships!

Our heartfelt thanks go to Glogirly for for putting him forward for this accolade and for designing the magnificent and coveted winner’s belt xx.

Not only that:…..
The young athlete has attracted attention from some of the ladies! Sassy over at Troublin Times is quite overcome ;-)

Austin says he would also like to thank his team for all the support I have been over the many long difficult years of training and general hard slog in order to reach the peak of his physical condition ……….. Ahem! He would like to ……… but he can’t. Apparently there was some issue with catnip substance abuse allegations at local level and his name became linked with illegal nip dealing! It got quite tense for a time and he had to keep his head down. He was always waiting for the inevitable knock on the catflap from the nip squad. And he blames me of course!

Anyway, that is all behind you now, Austin. You’ve paid your bribe debt. Onwards and upwards!!
Posted by CATachresis at 22:00