Those of you who have been with me for a long time will know about the cat flap and the trauma surrounding the use thereof by the resident cat and his chum. To recap:


It was thought that it would be a good idea to put a flap into the wooden structure rather grandly called a summerhouse.....

.....in order that Austin would have somewhere to go in the event of a meteorological or climatic emergency.  Heaven forfend that his delicate little furry bod should even come within a gnat's whisker of the precipitation that frequents this part of North West Wales.


Tigger the Tabby learnt after just one lesson i.e. me (gently) shoving his head against the flap, that he could gain entry and receive solace and (sometimes) succour the other side.

Austin, on the other hand, is a more delicate flower and doesn't like things bashing against his head - unless it's my hand when I scrunch his ears and make with the scritches.

As I have said before on this blog, he wants succour and I'm the sucker!


NB the hand in the last picture is of my young assistant who I thank for errrr assisting during the construction of this narrative :)

When a chap is pondering imponderables ......

Everything needs to be aligned!
Posted by CATachresis at 23:05 20 comments:

Austin and the Bellicose Balloon

I think that's one to the balloon!

"Who? Me? Austin the Innocent 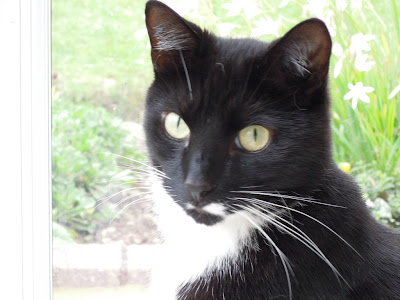 "Now I'm looking at you"

This was the look he gave me just after I told him that yes, he could go outside and no, he couldn't kill anything!


Check out the luxurious whiskers >^..^<  If I did alliteration, I would have called this Whiskers Wednesday, but I don't, so I didn't ;)
Posted by CATachresis at 17:05 23 comments:

The first I knew of it was when I heard Austin meowing, no... yowling, outside. I grabbed my camera: 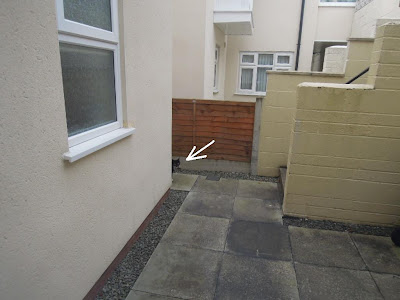 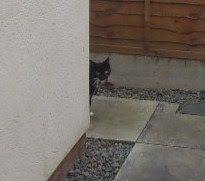 What's that you've got? 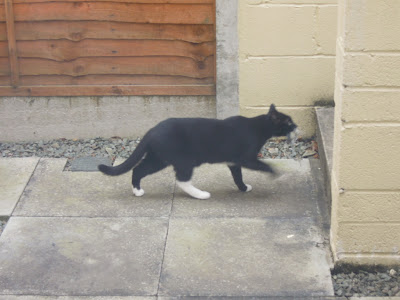 Uh oh! I might just make it past without her noticing! 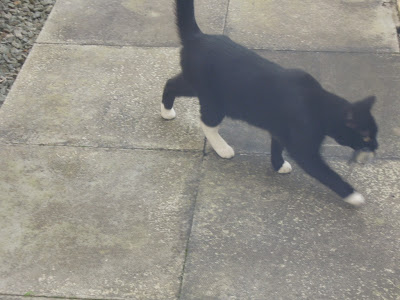 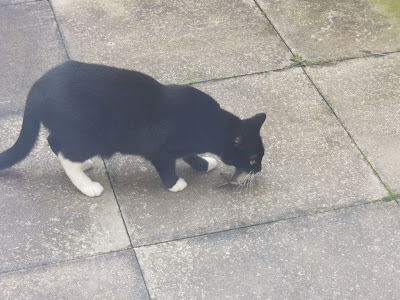 It was at this point I realised what he had in his mouth .... and it was still alive! Dropped camera, dropped everything and rushed outside dressed only in embarrassment, screaming like a banshee. I scared my mother at the other end of the house, the sheep in the field opposite and the unsuspecting neighbour who happened to be walking by with his dog. I must have scared Austin too, as he disappeared, but I am hoping that it gave the little blue tit enough time to make his escape. I think (hope) it might have, as Austin was very disgruntled when he returned shortly afterwards. The next day, sadly, the offering was already deceased!


This has happened too many times, but I still react that way (well maybe not always quite so loudly!) He's a hunter; he goes outside. It's to be expected.


I started this blog as a conduit for my humourous, slightly skewy outlook on life and it just so happened that Austin, my streetwise characterful tuxie usually is the focus of my musings. Of course this has its upside and its downside. Upside because he never ceases to amuse as my muse, and downside because he is, as you can see, a convicted killer.


I have said before that he looks upon me as his mother, of that there is no doubt.  He is friendly to most visitors, but it is to me he comes with all his little problems, worries and moans. It is on my lap and my lap alone he climbs when he wants comfort and cuddles, even though he will not be picked up against his will without scratchy/bitey repercussions.


Austin brings me his little offerings either because he thinks I'm rubbish at hunting and wants to convey that going to Tesco is a cop out, or because he wants to give me a gift. Either way I should not confuse him by shouting at him when he brings me whatever it is he's hunted and caught himself! It's a great compliment.
Posted by CATachresis at 16:41 29 comments: