I kind of understand why cats scratch the furniture; no, I do really! It's something to do with marking territory and sharpening claws. Actually, I've been very remiss about training Austin in this respect, so as he's got older, he's got into very bad habits. As a result, the furniture has acquired a look that's a mixture of shabby chic and derelict sink estate. 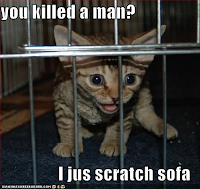 Just lately, I've been trying to encourage him to resist the urge to rip up the Parker Knoll, but being the attention seeking, rebellious teenager he is, he does it all the more!  So, before we are reduced to sitting on large piles of kapok and broken springs, I've introduced "Austin calming measures" (note rather neat link to previous post!).
Picture the scene. It's evening and Austin returns from his twilight forays, eats a mouthful of Felix salmon marinade and heads to the sofa arm.  In a trice I've whipped out a plastic spray container full of water - had to be careful it wasn't the one from the garden with the fertiliser, as I didn't want Austin to wake up the next morning to discover he'd morphed from short haired sleek moggie to long haired shagpile moggie, courtesy of "Miracle-Gro-all-purpose-concentrated-liquid-plant-food"!  His reaction was swift; he took one look and before I'd even had time to pull the trigger he was out the room!
And this was how it played out for the next day or two.  He'd enter the room, I'd lift my arm (say to pick up a glass or scratch my head) and he'd shoot off in the opposite direction.  So now he wasn't even coming near me :~(  One evening he slunk in and slipped through the curtains into the bay window and all was quiet for about 30 minutes as he sat and surveyed his catdom.  Now normally what would happen is he'd eventually nose his way out, go scratch the armchair and then jump on my lap for the evening ritual of shiatsu and cuddles.  This time though he decided discretion was the better part of valour.  This time the scratch scratch scratch took place behind the curtain as he systematically ripped up the carpet around the edge of the window.  When he finally emerged he gave me such a look of triumph all I could do was fall about laughing!
Needless to say we have agreed on a truce - with conditions: He scratches when I'm not around and I relegate the spray to the back of the cupboard. 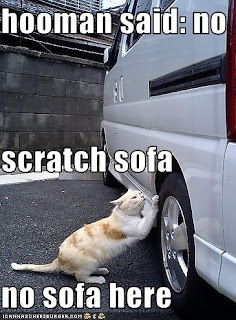 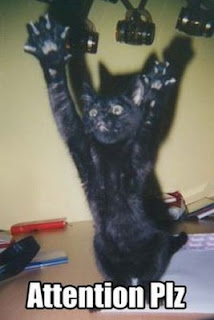 My cat stomps! Oh yes he surely does!  Never heard anything like it; he makes walking across the kitchen sound like a pneumatic drill going full pelt!

I'm downstairs minding my own business trying to be quiet and reflective and upstairs Austin's deciding he needs some attention. How can it be that he makes such a racket?  All he is doing is walking across the floor, but to me downstairs, it sounds like the builders are in. Stomp, stomp STOMP!  I know what he wants. "Foooood".  It's ridiculous really, he hardly eats enough to keep a flea alive. But he likes to make a fuss just so's he gets a chance to wind in and out my legs and trip me up.

To my deep consternation, Austin has developed a hankering to cross the road in front of the house.  Now, although it is a 30 mph speed limit, cars race along at 60 or 70!  I really don't want to have to go and scrape him off the road, but don't know, short of locking him up, what to do to stop him going!  He used to be such a scaredy cat, but now, egged on, I believe, by Tigger the Massive and enticed by the green fields and baby lambs opposite, he's finding temptation too much to overcome.

A couple of times I've caught him sitting in the middle of the road!!  Aaaargh!  I know the council are supposed to be introducing traffic calming measures soon, but am not sure what form this will take? Is some poor lowly council employee going to have to stand at the side of the road with a tranquiliser gun taking pot shots at all passing vehicles?  I need to know, because if the training isn't top notch they might miss the target and hit something with legs!  It's all a bit of a worry!