Austin was in a state of agitation when he was let got out of his bed this morning. I had no idea why? He was meowing as if he was auditioning for Cats the musical. Well we know he would make the best Mr Mistoffelees. However, he was not his usual cheerful cocky self; not by a long chalk.  It wasn't until much later I found out that we'd had torrential rain and thunder in the night! Now I vaguely remember some kind of explosion, but put it down to a dodgy prawn salad!
So, bless him, as he is terrified of loud noises, he's been like a limpet all day. Even when we (myself and the materfamilias) tried to go for a walk up the road, he followed us doing his I'm-a-pathetic-orphan-no-one-loves-me mew.
We decided to be firm with him, so strode along determined to shut out the sound of the plaintive cries. However, not too much ground had been covered before I weakened and decided to go back, because the last I saw of him he was heading for the thick bushes in a neighbour's garden which I knew had a large dog in it.
Some of the sorry tale was logged on my rubbish 10 quid mobile phone: 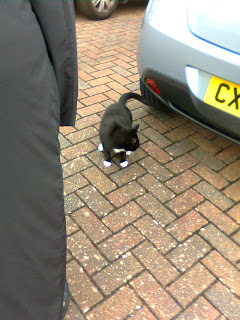 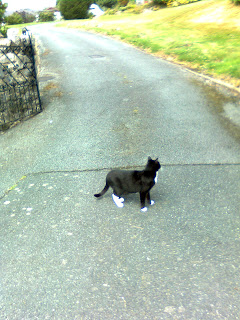 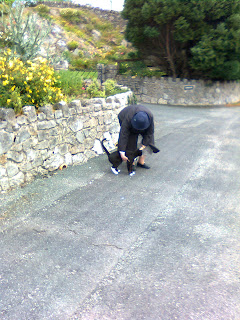 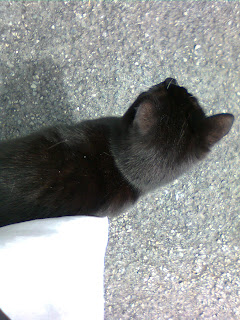 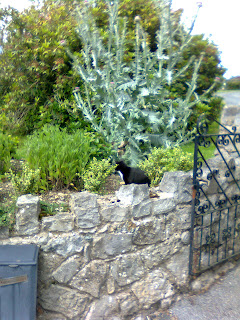 I eventually managed to retrieve him from some bushes and even though I couldn't see him, I could hear him. He didn't let up with the wailing. 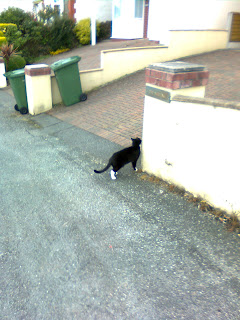 Let's go home. Pleeeeeez!
So where is he now? 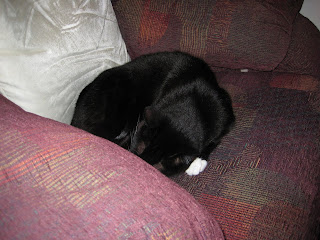 My poor baby. I feel like the worst kind of hard hearted, brute of a monster.  So tonight he will probably be sleeping nice and cosy under my duvet and I will be in the doghouse!
Posted by CATachresis at 21:55