If you've been with me from the beginning (and I'm sure you haven't, as I never told anyone I was blogging for months!!) you will know about the cat-flap-in-the-shed saga. In September 2009 I posted the sorry tale "Getting into a Flap".  Funny series of pictures, go on take a look!
Despite the initial flurry of excitement from Tigger who went in and out once, there has been nothing to indicate that the two have cottoned on to how the jolly thing works. Since then I've trailed up to the top of the garden (on sunny days!) to open up so the boys can sleep away the day. Good exercise for me, but a bit of a waste of a cat flap!  Until today ... nearly two years on!
I went up to do the usual and Austin for some reason didn't want me to go?  He threw himself bodily against my legs meowing and kicking up an awful fuss, impeding my progress to the point of me either having to fall over, kick him, or stop. The first was undignified, the second, unthinkable and third was understandable. So I did the third followed by the first. Happily the second was avoided.
When I eventually arrived at the shed, to open the door, this is what I saw: 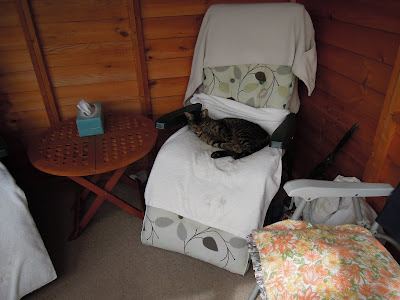 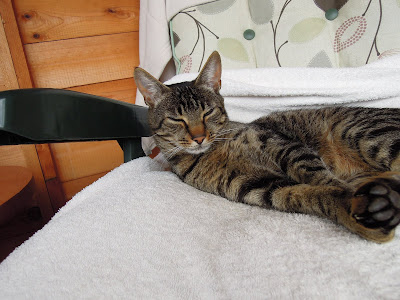 Doesn't he look pleased with himself?  He'd managed, after all this time, to suss it out. It only took one year and ten months!  I was so happy, I did a little dance. Well I would have done, if Austin hadn't been velcroed to my leg! I think he must have been a bit put out (yeah, out the shed!!).  He went off and had a bit of a sulk. 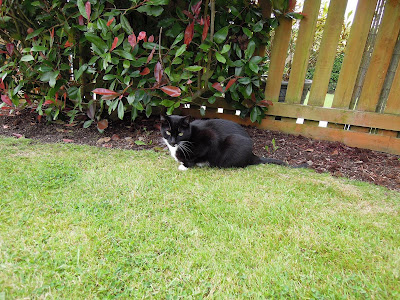 Now all I need is for Tigger to teach Austin and we're sorted!
By the way, these photos come to you courtesy of my brand new Nikon Coolpix ;>) This is the case I got with it >^..^< I'm right chuffed! 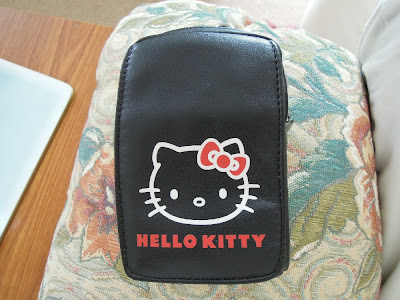 Posted by CATachresis at 21:30