1) The way he rushes up to me arching his back; screeches to a halt three feet away; makes like a crab; sidles; clonks his furry bod against me and then cuddles my leg with his lovely long tail, before returning to his extremely important business project that's ongoing behind the crocosmia.
2) The way he talks to me with barely audible little chirrups; just touching base; making sure we're still ok.
3) The way he looks me straight in the eye, blinks slowly before going all coy and rolling over on his back waving his front paws. I believe he knows that all those years ago I went to the rescue centre to get a dog!
Next time Austin says he will list three things he tolerates about me (negotiations about keyboard access are at a critical juncture and talks could break down). 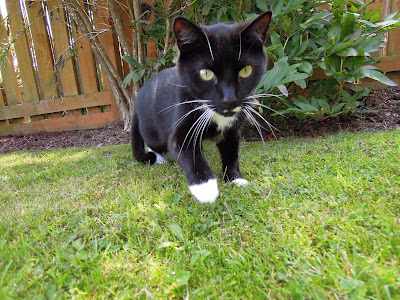 Posted by CATachresis at 21:38