When is a Tigger not a Tigger?

Ah Ha! I shall tell you. Come closer!

Here's the fellow we are talking about back in 2008! 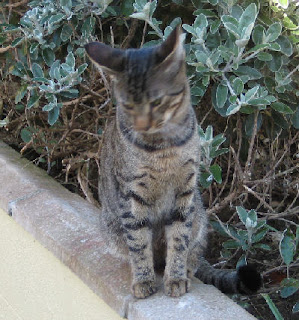 For those who don't know, Tigger (as we call him) is our everyday visitor. He doesn't officially have residence here.  As I said Austin first brought him home in early 2008. He was such a little chap, as was Austin, so we thought they were about the same age! We had no idea where he came from! Austin actually brought him into the house and said something like "Hey! This dood needs chow, now. He's, like, starving and everything!" 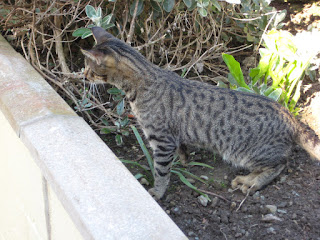 And here is Tigger today making himself at home still! 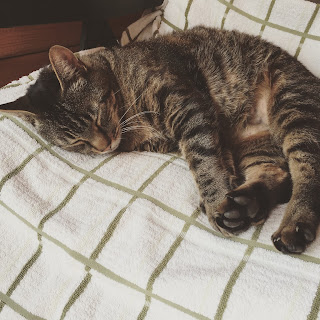 EXCEPT IT IS NOT TIGGER!

It appears that is his name AND he lives over the hedge at the back of our garden in a house where there are also two dogs!!!!! No wonder he prefers our place and no wonder Austin took pity on him and allowed him to doss down in the summerhouse and munch on the odd bit of stale kibble! He even lets him in the house! For a cat who singularly lacks the milk of kitty kindness when it comes to other cats, I think that is pretty spiffing of him!

As long as he continues to visit here, we will call him Tigger because that's what he's used to after  seven years!

I know I have not been around the blogosphere much the last week or so, please forgive lack of visits and comments and blog posts. I hope to get my mojo back soon, but also I need to lesson my virtual footprint for a bit. Austin still has a presence on Facebook and he's enjoying Instagram. Please join him if you would like. Just click on the relevant buttons on the side bar at the top of the page :)