My Week - by Austin

…….I've had a really taxing week, what with one thing and another! I don't really want to talk about it! No I really don't!!  Ok, so this is what happened:

From Monday to Wednesday there were several strange men in the garden splashing paint, stones and mulch around in equal quantities. It was quite unnerving and not an ideal combination of materials - unless you're Jackson Pollock !

Because it's been so freezing cold till now, there has been little sign of spring, but things are now starting to look up!

Anyways, back to my dreadful interesting week. Where was I? Oh yes! Thursday, I was awoken from some very pleasant dreams and bundled unceremoniously placed gently into the PTU and taken to that terrible place of torture the vet. He grabbed me by my unmentionables and scruffed me up something awful examined me and found that apparently despite me being full of pain (but of course never complaining) that my health was much more tickety boo than I thought and therefore did not need to book a return match visit for three months. Being the sadist kind man he is, he still felt the need to wrench open my mouth and stick his finger down my throat pill me and stick the needle right through my neck inject me! I, of course, sang loud and long throughout the whole episode, thus making me a strong contender in the "Leading Actor in a Musical" category in the upcoming Olivier awards.

Then there was Friday!!!!! OMG!!! I hadn't even had a chance to recover from the rest of the week! The Staff really needs an intervention. What was she thinking? She invited, yes actually invited, two thugs to come in to the house and smash it up!! I understand she even paid for this.  Is she bonkers? I could have done it for nothing, nada, zilch! I have to say though, they were very thorough. I watched it all from the bunker in next door's garden. They removed the whole side of the house four windows and put in new.  Sadly, because I wasn't snoopervising one of the thugs workmen accidentally measured too short for the sill on one of the windows and this is what happened!

He has to come back with another bit of board! The rules say he's allowed three goes to get it right ;)


So really I am knackered a bit tired and quite glad the week is over. 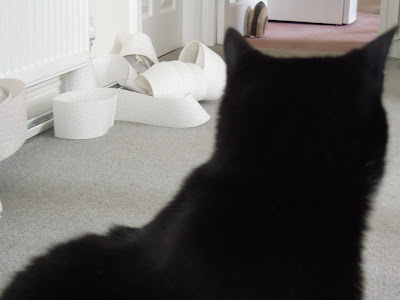 Look at the mess. I guess someone had better clear up the detritus! 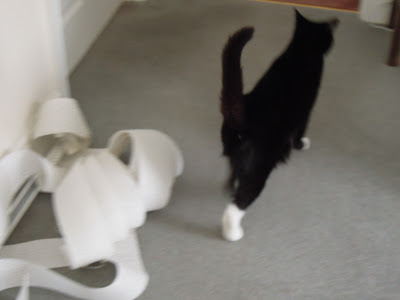 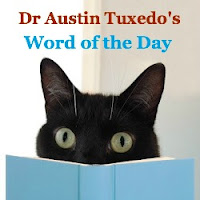 detritus - a disease spread by thugs and workmen