I don’t think there are many people who use social networking who have not come across the wonderful true story of the the cat and crow who become best friends. If you have been hiding in a cave for the last few years, here is a reminder:

Now there has been a book produced for children based on this story and Austin and I are the lucky recipients of two copies! Yes two copies!! What are the chances that?  But more about that in a minute.

The book is a beautifully presented 48 page soft cover published by Collage Books. The author is Lisa Fleming and the illustrator is Anne Marie Dominik-Harris. 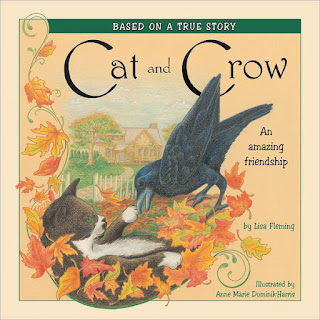 Just in case you do need updating on this story. Briefly, Cassie was a kitten who wandered into the yard of the home of Ann and Wally Collito one day. Moses is the crow who befriended and protected the kitten and they became inseparable. The Collitos watched this amazing friendship over the following four years.

This little book tells their story in a way that grips you whether you are three or eighty-three. And the illustrations are very well done and delightfully endearing - in fact the words and the artwork complement each other beautifully. There are also photos of the redoubtable duo and fun facts about cats and crows in the back of the book.

The author, Lisa Fleming, saw the You Tube video and was so enamoured of the story that she contacted the Collitos who welcomed her into their family and encouraged her to write the story. 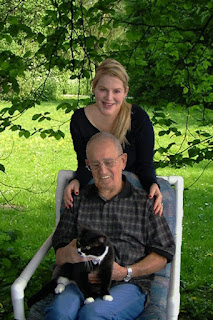 Lisa, Wally and Cassie
picture taken from Lisa’s facebook page
The book is in memory of Ann Collito

Austin and I thoroughly recommend this book - although Austin was initially a little sceptical because of past experiences with another member of the genus corvus! 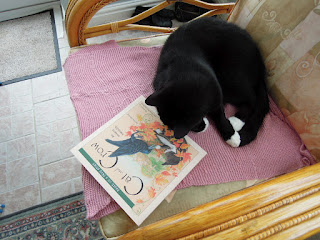 But as you can see, he is loving it now! 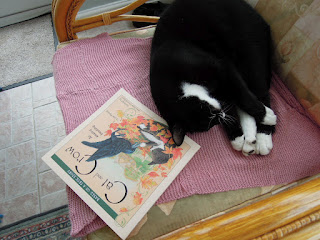 Now the reason we have two copies is because we won a copy in two different draws from two of our favourite blogs! The first was with Layla at Cat Wisdom 101 and the second was with Cat Chat with Caren and Cody. Now because we are not greedy and want others to have a chance to have a copy, Austin has decided to do his first giveaway! 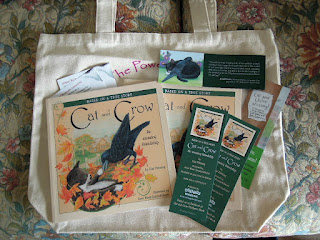 If you would like to have a copy of the book (and one or two other goodies!) all you have to do is leave a comment at the bottom of this post saying that you wish to be entered. If you belong to facebook it would be really good if you could “like” the facebook page :) The draw is open to anybody, anywhere in the world and will close on Monday 27th August at 12 noon BST. The winner, drawn at random, will be announced soon after. Happy commenting!

Update: Thank you very much to all of you who have entered the draw. It has now closed. The result will be announced shortly.
Posted by CATachresis at 21:20