Gunk is the stuff I have to put on the back of Austin’s neck every two or three months so that he doesn’t get little friends joining him on life’s journey. Much as I feel that Austin needs company, I do draw the line at anything that can jump higher than my house. It’s a time of great stress as I have detailed before (probably at great length, but intensive therapy has made the memory rather nebulous).

Because giving him a pill has really become impossible now - without a fatality occurring - I have got to give him gunk now twice as often. The trouble is his reaction to it has me helpless with laughter and that compounds his shame and embarrassment. He also knows my thoughts. This has become very apparent. For example I just think about spending some time catching up with PC stuff - blogs and facebook and twitter and Google+ and GoodReads and and and ….. Austin will have nothing of it. It’s "me me me" time (followed by "ow ow ow" time if I don’t acquiesce immediately).

So, in approaching the moment of touch down with the ampule, I have to pick the optimum time. If he’s too much awake and alert, then it will be me down the A & E with a shredded arm. If he is too deeply asleep then the shock will cause him to leap three feet in the air and again I’m down A & E, this time for a catectomy to have Austin prised off my face. No, he needs to be just a bit dozy with his neck facing upwards. Approach is cautious but determined. I make to walk by him but at the last moment as if I’ve just remembered something, I turn. As I turn I bend over the sweet puss and like an assassin with a stiletto I move in for the kill procedure!

Three seconds it’s all over and Austin realises he’s been “done”, but that’s ok as I’m already in the car and on the way to Llandudno for some much needed coffee and a quiet read in Waterstones. 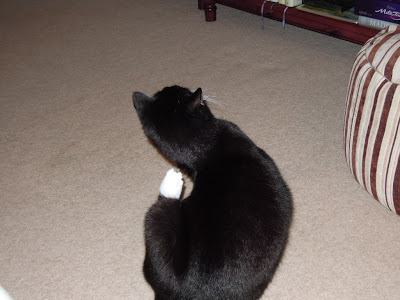 By the time I get back he’s still doing his low-slung cat thing and scratching, but that’s just for show. He sure knows how to hold a grudge. The scathing look, the threatening tail, the derrière of disrespect! I am history …… for all of five minutes :) "Treats, Austin?” 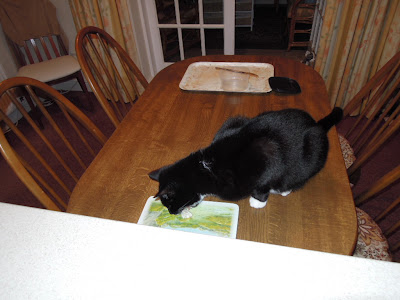 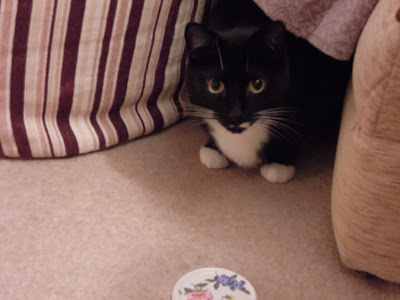 Life is hard when you are a cat!
Posted by CATachresis at 22:01