There are hundreds (probably thousands) of books, blogs, magazines and pamphlets detailing the many and various ways that cats communicate, both with each other, and also with us - mere bipeds who have the Defective Gene and lost their fur.
Now I know I'm a pigmy in the sphere of cat communication (it wasn't covered in first year linguistics at uni in 1987).  However, I believe that during the last three years I have picked up enough basic cat to more-or-less understand what Austin wants; and he has employed his highly developed superior intellect to penetrate the amorphous mass that passes for a brain in this exceedingly dense human to make sure that I do. He, of course, understands every word I say!

A short glossary of Pidgin Cat as understood by Inferior Human:

Chirrup - greeting when he enters room, and is not ignored by human. This is generally followed by some serious tickling under the chin and murmurings of sweet nothings from both feline and human before discussing the menu for lunch.

Mee NOW! - greeting when he enters room and is (accidentally) ignored by human. This is generally accompanied by a cacophonous crepitation of claws on carpet.

Mee ewe - plaintive call when left outside (accidentally) for one second longer than the specified time.

Yee OWL! - very cross - expletive deleted - when left outside (accidentally) for more than two seconds after the specified time.
meowmeowmeowmeowmeyat! - megamoan of intense displeasure all the way from the next street after being left outside for some considerable time after the specified time, necessitating him to have to fend for himself without a furless two-legged snivelling menial on hand to satisfy his every whim. 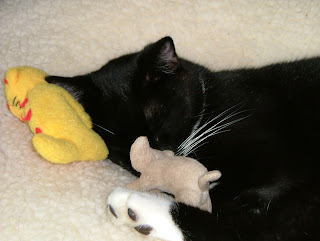 So when life's traumas become overwhelming, one needs a moment with one's teddy.
Posted by CATachresis at 16:28