Getting into a flap!

I have mentioned once or twice how both the cats like to sleep away the day up in the rather grandly named summerhouse (it's actually a shed with windows).  We've provided them with a nice soft chair each - originally the chairs were for the bipeds in the family, but somehow .... well you know how it is!  So each morning come rain or shine I toil up the garden with my freshly laundered just-got-out-of-bed early morning all-over body pucker (I resemble a relief map of Snowdonia) and open the door so the two moggies can avail themselves of the comforts within.

Aside; why is it the neighbour always picks the same moment to nip out and leer a good morning at me before I'm harnessed into my daytime attire?  I don't think he likes me much!

Anyway, moving on.  After several months of doing this (opening the door) it started to protest at being left open all day (and some nights) and got a bit too big for it's frame.  Enter Robin our gardener chappie:

"I could put a cat flap in and then you wouldn't have to scare the wildlife every morning by going outside, and it would give the door a chance to recover!"

Hurrumph!  A sensible idea! But isn't that taking pet care into the realm of the eccentric?  Probably; but anyway we agreed and I thought that that would be the end of it. Not so.  A few days later he turned up with a 4-way all-singing all-dancing cat flap contraption for £14.95 from B&Q.  "Great" I said !  He disappeared up the garden.

After several hours of huffing and puffing, three mugs of "builders", copious amounts of glue and paint and a bit of nifty man-handling of a jig-saw, it was in place.  A true work of art - Damien Hirst eat your heart out!  Now all we had to do is introduce it to the cats.

Now Austin is spooked by his imaginary friend, but Tigger was game.  So I put some food on the inside of the shed and held the flap open from the outside.  Tigger was through there like greased lightening.  I shut the flap. Austin looks on with bemusement. Silence except for the sound of a masticating cat inside. Then more silence ...... I take a peek. There's Tigger looking up at me from the door waiting, oh so patiently, for it to be opened.  Not fazed I stuck my fingers through the flap and eventually Tigger slid through.  He glanced at Austin:

"piece of cake; you just gotta get her to keep that flap thingy open!"

I went to fetch my camera for the next installment and instructed my nephew (Thanks Davy :>) to aim in the general direction of the cat flap and shoot. 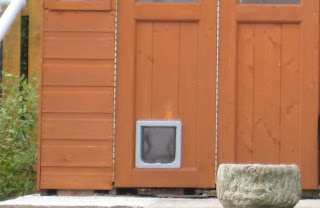 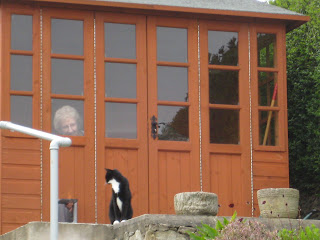 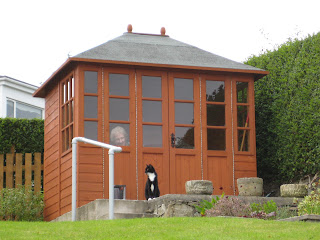 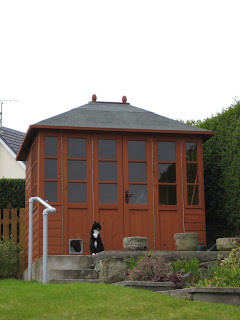 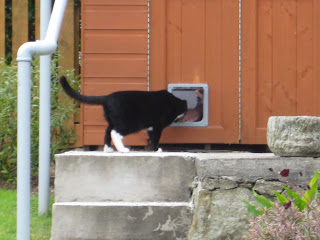 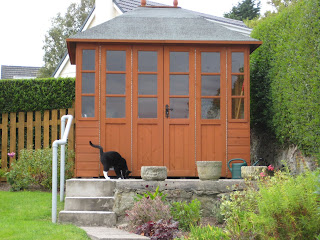 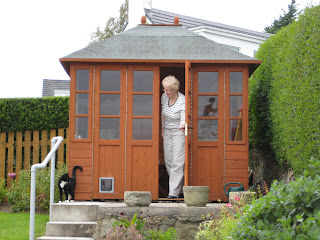 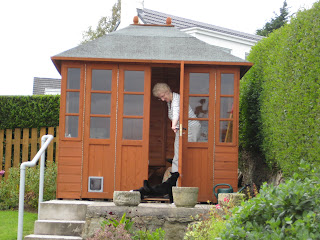 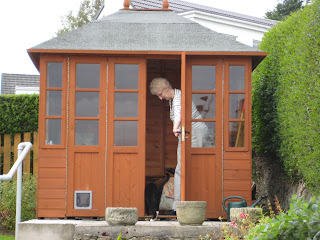 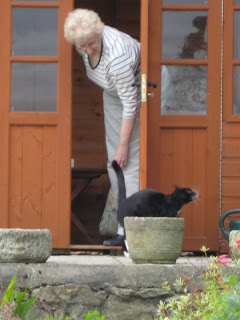 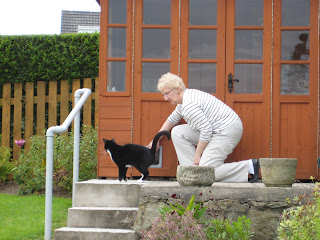 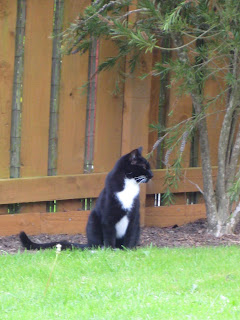 Not a great success, but we live in hopes.  Meanwhile the door remains open :>) 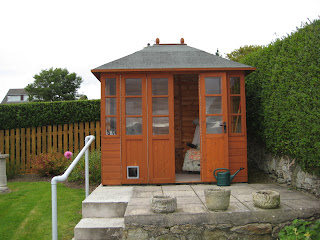 And my wrinkled persona continues to frighten the fauna - but you are not getting a close-up photo of that :P
Posted by CATachresis at 12:30