Austin has several human words in his vocabulary; at least four to my certain knowledge. Austin is one. Uh uh is another, used as a negative imperative. The other two are chicken and brush. These last two are his favourite things in all the world. The problem is he hasn't, as yet, come to grips with the notion of context, so we have had to adapt our conversation somewhat.

"John was a bit of a hen when he had a comb with the law".
I have already spoken about Austin's c*****n addiction, which he has had since we first dragged him kicking and screaming from his cosy cage in the RSPCA rescue centre. The b***h thing has kind of evolved. At first, whenever I approached him with what looked like a spikey instrument of torture, he acted as if he'd been dragged before a Torquemadan tribunal:
Eyes go huge
Eyes go black;
Whiskers all bristle
And ears turn back.
He would then wrap his whole body around both myself and the b***h and bite, scratch and kick all at the same time. The house stank of TCP and elastoplast for months. Then just when I'd got to down to the last day of bidding for chain mail, steel helmet and bikers leather gloves on ebay, he decided that it was cool to be b***hed! Go figure! Perhaps he and Tigger had had a chat and Tigger had shared with him the benefits of having one's skin ritually scraped and pricked. He turned from the devil incarnate to the angel Gabriel overnight!! Bless ;-) Must say I was relieved, as his ability to projectile vomit hairballs was getting close to olympic standard! 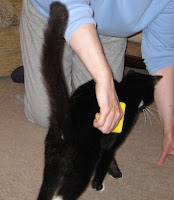 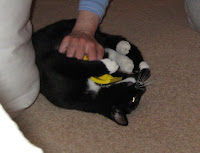 Just having a cuddle! 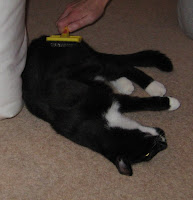 "Forget the fundamental go back to the chin!" 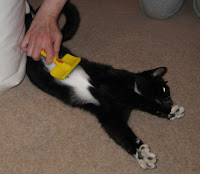 Check the paws for ecstasy! 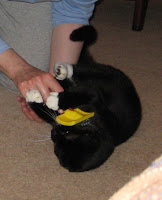 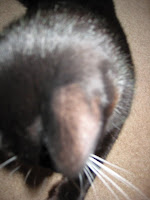 What's that dangly doodad hanging from that silver box thingy ? 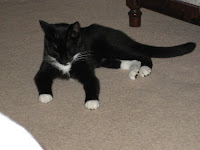 Just close my eyes for a minute if that's all right with you!
This is his post brush coma pose ;-}
Posted by CATachresis at 14:52