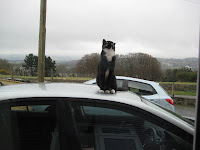 There is no doubt in my mind that Austin has been a bit preoccupied of late. It's probably because it's officially Spring - although the season (being an emotional and delicate flower) is a little reluctant to wed herself irrevocably to the stern and rather inscrutable Sir Gregorian Calendar for the forseeable. I mean what if Miss Spring throws a wobbly and allows sleet, snow and gale force winds to define her existence during April? Will Sir Greg spurn her advances just because she's overwrought and exhibiting PMT (Post March Tantrums)? It's a conundrum that keeps me awake most nights. Anyway Austin is also exhibiting unstable behaviour at the moment. It may be because he's aware that something should be stirring in his loins, but cannot for the life of him remember what! Consequently, he's been wandering around the place sniffing the air, crying pitifully and sticking his nose in places he shouldn't. Tigger, who as you might remember, has all his accoutrements, doesn't seem to be manifesting any of this uncertainty. As long as there's "foooooooood" and a soft blanket in the conservatory, he's as happy as Larry (BTW who is Larry? I never really knew!).

The other evening I went into the living room. The atmosphere was rather tense, it has to be said. Usually I would check around for little brown deposits or the sticky aftermath of a frenzied furball evacuation. But it wasn't that kind of atmosphere. It was kind of resigned despair. There was someone there and they were troubled. I waited. After a couple of minutes there was a slight movement of the curtain. I moved to the window and looked behind it. Nothing there?? I stood back and stayed still. There it was again! tug, tug ..... !! I looked again. Nope, not a sausage. This is ridiculous, I'm going gaga (well!). Ok, enough is enough. I lifted up the front of the curtain and to my amazement a rather embarrassed Austin stuck his nose out, his face all flat and whiskers awry! It seems (and I had to have it explained to me) that he was trying to access his usual viewing place and somehow got caught up in between the curtain and the lining! The more he tried to extricate himself the more he got his furry knickers in a twist. There followed a fairly lengthy conversation:

Yes, I realise that now.

I could have starved to death.

That's rather unlikely! Anyway you're all right now.

But I was very frightened

Never mind, it turned out ok in the end.

I will probably have nightmares!

Can I sleep on your bed tonight?

I don't think that would be wise

I think you've probably found one?!!

After I had spent some considerable time explaining it was impossible to accommodate him exactly as he wished and that as a mere cat he was, sadly, not allowed access to my brand new 12 tog, especially after the jumping-off-the-wardrobe incident ruined the old one, he subsided and sloped off, ears flat and tail scraping the floor.

Next morning Austin went out very early. Eventually I came to, stumbled into the living room and pulled back the aforementioned curtains. This is the scene that confronted me:- 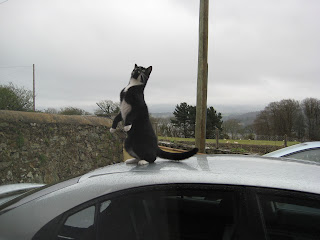 OK clever dick, when I said you were a mere cat I didn't mean you were a meercat for crying out loud!!! SOMEONE is taking the puss !!
Posted by CATachresis at 20:09