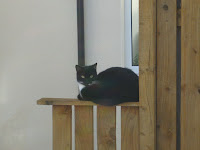 I am starting to think that the cat(s) in my life are refugees from a cartoon strip. Or maybe they are just figments of my fevered imagination. There was an incident the other day that really defies description - but that doesn't mean I'm not going to try and form the words, even if I have to swallow the dictionary first and regurgitate portions at random – bit like one of Darwin’s descendents or the “infinite monkey” concept. 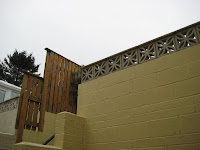 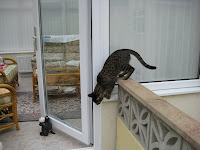 Ok, check out the pictures. As you, my loyal reader know, we have the famous conservatory door, which is upstairs and at the back. This door opens out onto a path and there is a wall on the left which leads to steps down below. Ahead there is the neighbour's wooden fence (he with the holiday home, the neurotic pooch called Toby and an unfinished balcony out the front). The fence as you can see has got a couple of what can only be described as vantage points - for cats. Austin spends a great deal of his outdoor time balanced on one of these three inch wide slats of wood, master of all he surveys. Sometimes I look out and Tigger is there instead. When I open the door, whichever cat is perched will leap from the wooden fence onto the wall, run along the top, jump down onto the path and in through the door. This is quite a precarious exercise as there is a 15 foot drop down onto concrete on the other side of the wall! When it was icy one day Austin did his usual leap and literally skidded along the top of the wall, very gracefully, rather like a little furry four-legged Olympic tobogganer who was giving his all for the gold medal.
On the day in question, they were both there on the fence, one up above and one down below, looking for all the world like a couple of tiny sphinxes on the watch out for the old “Giza” next door. Soon as my hand touched the door handle they both, in one unanimous fluid movement, leapt from the fence to the wall. It was like a scene out of Swan Lake! So balletic ….. so graceful …….. so dumb! In their eagerness to get in the door, they forgot that, mathematically speaking their combined body ratio was greater than the surface area of the top of the wall. They came together like a couple of juggernauts sideswiping each other on the motorway. The result was that Tigger, having the greater body mass index, managed by sheer weight to dislodge Austin from his claw-hold on the 5 inch wide wall! Thankfully Austin was on the side of the path, so, although he was surprised he wasn’t injured as he picked himself up from the paving stones. Tigger, however, because of the momentum (i.e. product of the mass of a body of matter multiplied by its velocity) disappeared for a second over the other side! All I could see were a couple of claws!
After what seemed like an age, his nose appeared, then his face, straining as he tried to get a foothold on the smooth wall. Somehow with a supreme effort he heaved himself back up on top. Any normal cat would have given it up as a bad job, but he was having none of it. With one leap he was on Austin’s back, who was making the most of the advantage and was halfway through the door. He almost made it. But Tigger was lightening quick, and with a yowl he wrapped his jaw round Austin’s neck and chomped a mouthful of fur. Austin squealed and turned to fight him off. There was fur, teeth and claws flying in all directions. By this time I had come to my senses. Galvanised into action I grabbed a scruff with each hand and wrenched them apart. Tigger struggled, Austin struggled, I struggled. I dropped one outside the door and slammed it shut. I took stock. The question was did I have the correct cat inside? By this time I couldn’t have cared less really. It was a cat, it was inside. The household status quo was one cat, two humans. It had been restored. 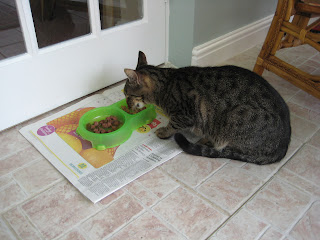 Posted by CATachresis at 17:42