Blackie the sheep and miscellaneous fleas 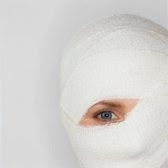 I've just managed to dupe Austin into swallowing his six monthly worm pill and am pleasantly surprised to've come out of the encounter relatively unscathed!

But he did rather get "the 'ump" over being de-flea-ed this time. If there was an oscar for cat pouting he would have won for that performance. Oh the betrayal!

What d'you have to go and do that for? What have I ever done to you?


I show him my latest scars.

Well apart from that?

"It's for your own good. You really don't want whole colonies of rampaging insects building conurbations in your coat do you?"


I can deal with it!

The whole of the following day, whenever I turned around, there he was lying like flat-pack cat with his head on his front paws, two reproachful green eyes following my every move, unforgiving, accusing, pained.

Anyway I'm digressing. Across the road there is a field of sheep. They're quite noisy at times, but to my certain knowledge Austin has not really given them any consideration, except the time when he and Tigger the Tabby were engaged in a spot of internecine carnage with a couple of the Gingers. Poor Austin, who is a home-loving boy, found himself in unfamiliar territory without his passport or visa or indeed, his catnip stash. Once he realised this he made his excuses and left:

Sorry, just realised I have an appointment with my therapist

Blackie is the token "ethnic" in the bunch over there and I have to say is generally accepted within the community. However, she disappeared several months ago before Austin came and we thought she had gone to the great sheepfold in the sky via the dinner menu of The Queen's Head.

Austin monitored the situation very closely from his favourite perch in the upstairs living room window. It is from here he keeps tabs on everything that goes on in the street and oversees it all like some benevolent but remote dictator. On this occasion I could hear muttering and growling wafting from behind the curtain. Having taken a few precautions (chair, whip, full body armour), I took a peek. Poor Blackie! I hoped she wasn't a sensitive soul. If looks could kill! You could feel the malevolent laser beam irradiating from those emerald orbs. She was mutton!

I am hugely distressed to think that he might have racist tendencies, but he is mixed race himself, so what's the deal? Competition?

Happily, after several days of this he apparently satisfied himself that the beast was a benign presence in the neighbourhood and has since paid her scant attention. 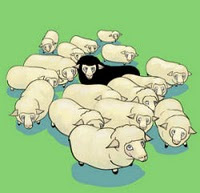 Posted by CATachresis at 12:20