I have taken to wearing thick denim jeans and shin guards of late! He, who must be appeased, has devised a new game. It's called "screeching like a banshee and hurling fur, tooth and claw, onto the leg of innocent passing human, who's just minding her own business".

I don’t know why he does it? It's not nice. It's not cricket. It hurts. I end up looking a bit like Quasimodo dragging his hunch back and misshapen leg around the Notre Dame! He thinks it's great fun and tries again from another angle - just to even out the damage I suppose. I put it down to too much protein in his diet, or possibly it's his TV viewing habits. He's gone off Fiona Bruce. He's discovered Extreme Furballing on Sky Sports. So I have had to restrict his channel hopping activities to CBBC and CeeBees (or whatever it's called) by utilising the parental control facility. It will only last as long as it takes for him to work out that the pin number (that's personal identification number number, so why do we say it? It's tautological) is three digits from my mobile number plus one other taken at random from the telephone directory (have to be careful you know!).

Austin is most likely to indulge in this antisocial behaviour when he's come in from his nightly rampage around the neighbourhood. So I have taken precautions when opening the door. Armed with a tea towel in one hand and brandishing a plastic water bottle in the other I approach with trepidation but proclaiming loudly that if one iota of my life blood is shed during this encounter then it's back to the car engine from whence he came:-


Open door, he shoots in, I scream, he screams, I step back, he advances, I retreat into corner holding tea towel like some neophyte matador first time in the ring. He edges round me, I start whimpering. He loses interest, sticks his leg in the air and starts cleaning his fundament with contrived indifference. I'm a gibbering wreck! He's king of the castle. We move on ...... .. 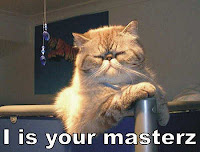 By the way is there anyone else out there in cybercatland who also has a cat that won't eat unless they're chaperoned?
Posted by CATachresis at 09:30